What is Dupuytren’s Contracture?

Dupuytren’s contracture is a condition in which the fingers of the hand bend in towards the palm. It is caused by a thickening of the tough connective tissues in the hand (called fascia) which can lead to the fingers being drawn into the palm. 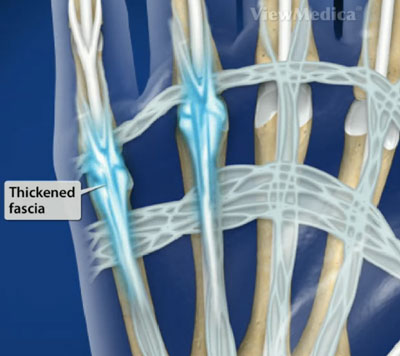 Dupuytren-like thickening of the fascia can be the result of laceration or trauma, but Dupuytren’s itself is the result of genetic predisposition. Between 60 and 70% of all people who suffer from this problem have one or more genetic relatives who have also suffered from it.

What are symptoms of Dupuytren’s contracture?

Dupuytren’s contracture most often presents in its earliest stages as a simple thickening of the fascia of the palm, which causes the palm to feel tough and bumpy. At first, the bumps will be painful, but over time the pain will go away, although the condition will continue to progress. Over time, it will slowly grow to the point that all the fingers are curled into the palm, rendering the hand almost useless. The little and ring fingers are most commonly affected, and the middle finger can be included in some severe cases, but the index finger and thumb are seldom afflicted. How to diagnose Dupuytren’s contracture

Dupuytren’s can sometimes be confused with trigger finger in its early stages, but once the thickening of the fascia is detected, a diagnosis is more readily reached. Once the fascia has begun to noticeably thicken, Dupuytren’s is apparent, and the doctor will proceed to treat accordingly. Often, surgery is unnecessary, but even with it, there is no permanent way to cure or arrest the condition. There have, however, been some successes with the use of injectable medications. Click here to read more about this non-surgical treatment. Injectables act by selectively dissolving and softening the thickened tissues, allowing greater freedom of movement in the hand and fingers. It offers a promising non-surgical treatment to ease the contracture but can be used only in select cases.

Surgical treatment is traditionally the preferred method of dealing with the problem, and it consists of incisions in the skin that opens the palm so that the fibrous tissue can be thinned out or removed entirely where possible. The fascia can grow into the skin, or dermis, so that must also be considered and dealt with by the physician. While the surgery seems invasive, it leaves minimal scarring and causes surprisingly little discomfort or pain. How can Dr. Knight help you with Dupuytren’s Contracture?

Dr. Knight will, upon diagnosing Dupuytren’s, decide which route will be the best to take and discuss his conclusions with you. While he prefers a conservative, non-surgical remedy, he is comfortable making whichever decision may be necessary to best relieve your pain and discomfort.

Dr. Knight is excited to be serving residents throughout the Dallas area. He’s one of the best hand doctors in Dallas and if anyone can help, he can. Come to our Dallas office or Southlake hand and wrist center at your convenience.

Why is Dupuytren’s contracture called the Viking disease?
Dupuytren’s is often referred to by laymen as a “Viking disease” or “Celtic claw” because it overwhelmingly found in people who are primarily of Scandinavian and northern European descent. Human populations in different climates have evolved to metabolize or process vitamins and minerals differently, as in the case of rickets, so the increased likelihood of developing Dupuytren’s appears to be a side effect of some evolutionary feature of the northern European phenotype.

What else can put me at risk for developing Dupuytren’s contracture?
In addition to northern European and Scandinavian descent increasing your likelihood of developing Dupuytren’s, there are several other factors that come into play. For one, men are more likely to develop the disease, to the tune of six times higher incidence than in women. Diabetes is another condition that could possible lead to the development of Dupuytren’s, but this is in a bit of scientific limbo, because diabetes tends to exacerbate most conditions, and a direct causal relationship has not been determined.

Does Dupuytren’s contracture ever affect the feet or just the hands?
The disease we call Dupuytren’s contracture is specific to the condition as it affects the hands, but there is a similar condition called plantar fibromatosis, or Ledderhose disease, that mimics the symptoms of Dupuytren’s, but in the feet. Both conditions are typified by thickening of the fascia or tissue of the palm of the hand/sole of the foot, and are treated in similar ways, and are believed to stem from related stressors, but no direct relationship between the two diseases has been established. Ledderhose disease is also much rarer than Dupuytren’s contracture, and so much less research has been devoted to the condition, but time may show a more direct relationship.

Can some foods increase the likelihood of developing Dupuytren’s contracture?
By and large, the syndromes and conditions described on this website that have a food-related trigger are overwhelmingly inflammatory, and since Dupuytren’s contracture does not have a specifically inflammatory component, there are no foods or drinks associated with the development of the disease. Some studies indicate that there may be a relationship between the disease and in inability to either absorb or utilize magnesium within the body, but these are still nascent theories.