What is Cubital Tunnel Syndrome?

Cubital Tunnel Syndrome is a constellation of symptoms resulting from entrapment, pressure, or irritation of the ulnar nerve at the elbow. The ulnar nerve runs the full length of the arm as it passes from the neck to the hand. Its sensory functions include sensation in the pinky finger and one half of the ring finger. It also gives motor control to many of the small muscles of the hand responsible for dexterity and some of the larger muscles of the forearm responsible for grip strength. 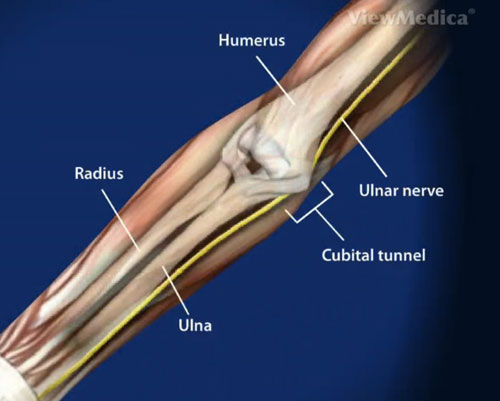 The cubital tunnel is an anatomic space formed by the humerus, the medial collateral ligament, and its retinaculum. The tunnel is located behind the bony protuberance of the medial epicondyle. As the ulnar nerve passes through this cubital tunnel it is extremely close to the skin’s surface, and prone to trauma. As a reference, this area is known as the “funny bone”, and a blow to the ulnar nerve here produces a painful, shock-like jolt.

Cubital Tunnel Syndrome is a result of entrapment, pressure, or irritation of the ulnar nerve at the elbow. Simply bending the elbow causes stretching of the ulnar nerve and narrows the diameter of the cubital tunnel which can potentially lead to irritation. Overuse of the elbow or prolonged positioning of the elbow in flexed position can lead to cubital tunnel syndrome. Anything that narrows the diameter of the tunnel such as soft tissue swelling, fluid imbalance, bone spurs, arthritis, or growths in or around the elbow joint can cause problems as well. Repetitive use of the hand and wrist on the keyboard and mouse may lead to swelling of the muscles around the tunnel. What are the Symptoms of Cubital Tunnel Syndrome?

The elbows of those affected by cubital tunnel syndrome is often painful. The pain may be described as vague discomfort to severe pain and may progress from intermittent to constant. It may radiate up or down the arm. Symptoms in the hand include numbness and tingling in the pinky and lateral half of the ring finger. Grip strength may be decreased, and fine motor movements of the hand and fingers may be compromised. The early symptoms of Cubital Tunnel Syndrome are exacerbated when the elbow is in a flexed position.

How is Cubital Tunnel Syndrome Diagnosed? Plain film X-rays of the elbow is taken to rule out deformity of the elbow from old trauma or bone spurs from arthritis. MRI, and high-resolution ultrasonography are sometimes obtained to assess for possible additional soft tissue injuries.

Electromyography and Nerve Conduction Studies can assess the severity of the condition or confirm a questionable diagnosis. NCV testing is normal in 20% of patients with Cubital Tunnel Syndrome.

How is Cubital Tunnel Syndrome Treated?

In mild-to-moderate cases conservative methods are utilized for a several months. The elbow is splinted at night in extension in a Pil-O brace. If night splinting is successful, it is recommended that it continue for an additional 6 weeks past the date of resolution to prevent recurrence.

NSAIDs, physical therapy, and avoidance of trauma to the elbow are additional vital components of a conservative approach to treatment. Ergonomic modifications of the workstation with frequent computer mouse and keyboard breaks may be beneficial. Use of a splint for 2-3 weeks post-surgery can be expected, as well as intensive physical therapy to strengthen the limb and prevent contractures. How can Dr. Knight help you with cubital tunnel syndrome?

Dr. Knight has years of significant experience in peripheral nerve surgery such as cubital tunnel syndrome. While cubital tunnel syndrome is usually resolved with non-operative treatment, if surgery becomes necessary, Dr. Knight will carefully determine with your help what your daily activities are and what sports you enjoy to determine which minimally invasive procedure is best to return you to pain-free activities quickly.

Dr. Knight is excited to be serving residents throughout the Dallas area. He’s one of the best hand doctors in Dallas and if anyone can help, he can. Come to our Dallas office or Southlake hand and wrist center at your convenience.

What if my Cubital Tunnel Syndrome goes untreated?
As with any condition that involves the nerves of the upper extremity, Cubital Tunnel Syndrome must be treated, otherwise it will get worse and the symptoms will increase sequentially until the sufferer essentially loses all use of the affected arm, due to increasing nerve damage.

How long will it take to recover from Cubital Tunnel Syndrome?
Recovery time for Cubital Tunnel Syndrome depends entirely on the method of treatment employed to deal with your specific case. Conservative treatment, which Dr. Knight always prefers to employ prior to resorting to surgical intervention, can be ongoing, and often requires modifications to behavior and ergonomic adaptation to keep the symptoms from recurring or getting worse. In this instance, the recovery time can be said to be the rest of your life, because once the development of symptoms starts, treatment is a matter of managing ongoing development. If your symptoms are already developed to such a point that surgery is required to relieve them, then the time required is considerably less, by comparison. After surgery, you will be wearing a splint, and could require up to 4 months of physical therapy to strengthen the newly repaired cubital tunnel.

How can you treat Cubital Tunnel Syndrome?
Cubital Tunnel Syndrome can be treated conservatively with a nightly splint known as a Pil-O Brace, which holds the elbow in extension to relieve pressure on the cubital tunnel and the cubital nerve within. This process can take up to six weeks to show effects, and it is advisable to continue use of the splint for many weeks after symptoms abate, to avoid any recurrence. If conservative treatment is not effective, or your symptoms have advanced to a point that requires it, surgery is the next route to dealing with your condition. There are three possible surgeries, the first being an anterior transposition, where the ulnar nerve is repositioned so that it no longer rubs against the tunnel’s tissue and causes pain when the elbow flexes. Alternately, decompression surgery widens the cubital tunnel and stops the rubbing on the ulnar nerve that caused the pain in the first place. Lastly, an epicondylectomy involves slicing out a part of the medial epicondyle which also enlarges the space through which the cubital tunnel passes.

Can Cubital Tunnel Syndrome be treated without surgery?
As discussed above, conservative methods of treating Cubital Tunnel Syndrome are preferred to surgery unless absolutely necessary, so the answer is yes, it can. Depending on the severity of the damage or pain suffered by the patient, however, surgery may be the only viable option for treating the condition. Typically, surgery becomes necessary when the effects of the condition are left untreated for too long, so as long as you take the initiative to see a doctor and have your pain investigated and treated as soon as possible, surgical intervention can be avoided.