What are Vascular Disorders?

The hand is an extremely delicate and precisely calibrated part of the body, and the vessels that keep is supplied with blood are of unquantifiable importance to its operation. Because the entire hand is served by only two arteries, the ulnar and vascular arteries, there is a real risk that blood flow could be compromised or altered due to anatomical abnormalities or trauma. The catch all term for vascular problems of the hand is “Vascular Insufficiency,” which refers to a lack of adequate blood supply to the hands.

Vascular disorders of the hand are separated into five distinct classes of conditions, each with a different cause (Traumatic, Compressive, Occlusive, Tumors and Vasospastic). Traumatic disorders are just that, caused by trauma, such as a laceration, which may sever the artery entirely or just damage it enough to impede blood flow. They can also cause pseudo-aneurysms, in which the vessel heals over improperly, forming a bubble on the wound site, and running a risk of vessel leakage and clotting. Compressive disorders occur when the vessel is in some way twisted or kinked, causing a buildup of pressure on one side of the kink, and a lack of flow on the other. Occlusive disorders include thrombosis and atherosclerosis, wherein a foreign body (such as plaques or a blood clot) enter the blood stream and impede the flow of blood through arteries. Tumors and malformations are caused when growths form on or around the blood vessels, such as when a ganglion cyst forms in the hand, which can constrict the blood vessels, or a hemangioma, in which the tumor grows directly on the blood vessel itself. Vasospastic disorders are caused when the blood vessels involuntarily spasm, which constricts bloodflow, often to such an extent that the tips of the fingers are completely cut off form blood, turning them blue, white, or even black. This particular presentation is indicative of Raynaud’s disease (when of unknown origin or when there is a definite instigating factor.) Vasospastic disorders are, often, brought on as a result of severe cold. 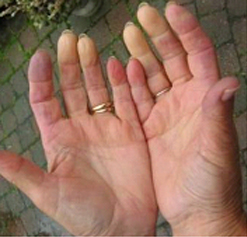 Vascular insufficiency is often characterized by pain, numbness, cold intolerance, swelling around the blood vessels, and discoloration of fingertips, as well as the formation of ulcers on the hand that do not heal in a normal timeframe, if they heal at all.

How to diagnose Vascular disorders

If your doctor expects that you may be suffering from a vascular disorder of the hand, you will undergo a physical exam of the affected areas, and your pulse will be checked at various key locations along the extremity. Swelling will be visible externally, as will distention and discoloration of veins and arteries, as well as palpable beneath the surface. Another important part will be to compare your base body temperature with the temperature of your fingertips, because if the difference is very great, it can signify vascular insufficiency. In addition, any unusual lumps or growths will be examined, to see if they are interfering with the flow of blood into the hand. And MRA, or Magnetic Resonance Arthrogram, can be essential in determining the flow of blood, as it shows an image of all of the blood vessels in the hand, and when contrast liquid is injected into the system, any vessels that do not take on the same color are obstructed in some way, and must be reopened. A Doppler/ultrasound exam serves much the same function, but does not require contrast injection, so is non-invasive. The hand can also be submerged in cold water, and if it takes too long for the blood and warmth to return to the fingertips, then there is definitely a problem.

Because the causes of vascular disorders are so widely variable, their treatments are likewise myriad. For conditions such as Raynaud’s disease and phenomenon, vasodilators (such as Procardia), or drugs that allow the arteries and vein to expand, are essential for relieving the constriction caused by the spasming of vessels. Raynaud’s has also been seen to be the result of smoking, such as Berger’s disease, and smoking can also cause atherosclerosis in the veins of the hand. So oftentimes cessation of smoking goes a long way to remedying any vascular problems in the hands. In cases where the only real symptom and cause is sensitivity to cold, the solution can be as simple as wearing gloves in order to keep the hands warm. In more severe cases, as in a blood clot, it may be necessary for the doctor to perform surgery on the blood vessel. Surgical options include going into the vessel and removing the clot physically, after which the doctor may have to perform a vein graft surgery after removing the clot and the affected area. In some instances, it may be possible to use TPA, a drug, to dissolve the clot, which removes the necessity of invasive surgery.  Finally, a sympathectomy may be performed, which involves the removal of the nerve that rests along the blood vessels on the hand, which, if all goes well, reduces symptoms, and can get rid of them altogether.

How can Dr. Knight help you with vascular disorders?

Vascular disorders can be straight forward but in some cases are very complex and involve a multi-team approach with Dr. Knight enlisting the help of vascular surgeons, internal medicine physicians, cardiologists, and pain management to restore circulation to the hand as quickly as possible to prevent any permanent catastrophic injury from occurring.