This case involves a 24 year old Mixed Martial Artist who injured his non-dominant left hand at the base of the middle finger at the knuckle or MCP joint after throwing a straight punch. He felt immediate pain and swelling with snapping noted at the top of the knuckle when moving the finger from extension to flexion.
On examination, there was localized swelling with inability to fully extend the MCP joint and a palpable defect to the side of the extensor tendon. X-rays were taken which showed no fractures. An MRI was obtained which confirmed that the sagittal band which centralizes the extensor tendon was torn. 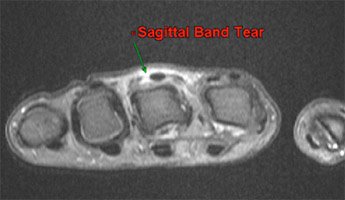 The patient underwent surgery with repair of the sagittal band centralizing the extensor tendon.

After surgery, the patient was placed in a splint for 6 weeks. After the repair had healed, he underwent 3 months of therapy regaining full function and strength. After 5 months, he returned to full strike force against the knuckle.

The Extensor Tendon that extends the knuckle or MCP joint is held over the center of the joint on both sides by the Sagittal Bands. Beneath the tendon is the joint lining or capsule. Injuries to the extensor mechanism of the fingers can be career ending for professional martial artists or boxers. This injury can result from a single blow or repetitive blows over time. It most commonly affects the middle and little fingers. The injuries may involve the saigittal band or capsule or both.